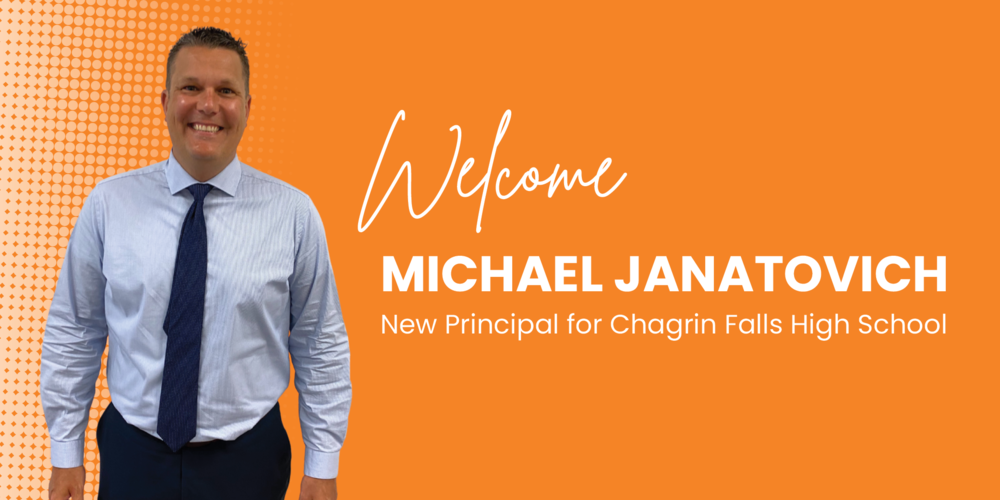 Michael Janatovich was hired as the new high school principal at the June 8, 2022, Board of Education meeting.

Janatovich previously was the principal of Cuyahoga Heights Middle and High School.  Prior to that, he was the assistant principal at Harmon Middle School at Aurora City Schools and the assistant principal, athletic director, and middle school science teacher at Cuyahoga Heights Schools.  In his time at Cuyahoga Heights, he developed and implemented a multi-tiered system of support that has positively impacted all students in a variety of aspects including academic success, end of course remediation, social-emotional needs, and other needs based on individual learners.  He also implemented a teacher leadership collaborative to grow teacher leadership, was involved in the district’s strategic planning process, created a positive working culture for staff and students, and developed a master schedule which included 14 AP classes and flexible options for students. He also was named president of the Chagrin Valley Conference.

“Mike was a candidate who stood out above the rest from the very beginning of the search,” said Superintendent Dr. Jennifer Penczarski.  “His depth of experience at various grade levels set him apart.  Parents, staff and students who participated in the search process commented that he was approachable and genuine. He will be a fantastic addition to our team."

Janatovich received his Bachelor of Science from Baldwin Wallace College in middle childhood education and a Masters of Science from Indiana Wesleyan University in curriculum and instruction.  He received his principal licensure from Baldwin Wallace and superintendent and educational leadership licensure from The University of Findlay.  He is expected to receive his Doctorate of Education from The University of Findlay in 2023.  He has presented at numerous local, state and national conferences.  He also is a member of several professional education organizations.

“I am excited and honored to join the team as the next principal of Chagrin Falls High School,” said Janatovich.  “Chagrin Falls is a community that values academic excellence, their students, and all stakeholders in their community. I look forward to making connections with the students, staff, and parents in the community in order to provide the best educational setting for all of our students,” said Janatovich.