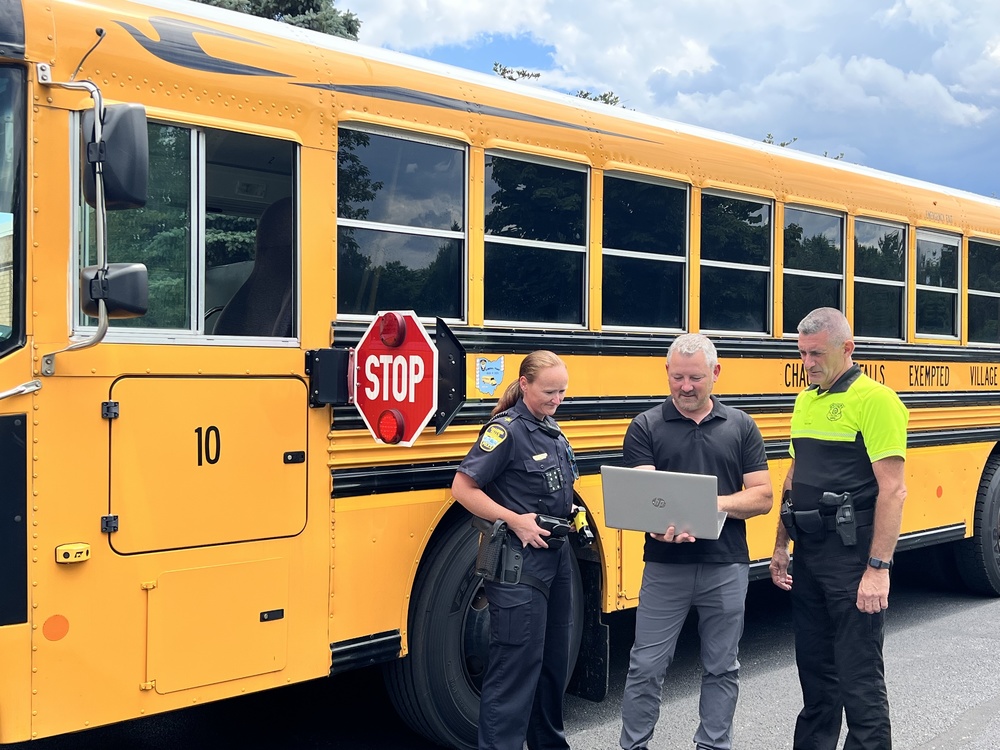 Chagrin Falls Schools mechanics installed dual-lens stop-arm cameras on five of the District’s school buses as a pilot program to increase its precautions for student safety.  These cameras are mounted on the driver’s side of the school bus below the exterior stop arms to give a clear view of the license plates of any motor vehicles illegally passing a stopped school bus.  In addition to capturing license plates and a picture of drivers in their cars, the information will be given to the police to issue citations to these offenders.

On July 13, the District invited local safety officials to Gurney Elementary School to see first-hand the newly installed cameras and how they work.

According to Pro-Vision, the maker of the cameras, when illegally-passing drivers are issued citations, they learn the law, and violations are reduced.

“Drivers put the lives of children in danger when they fail to stop for the red lights on a school bus,” said Police Chief Amber Dacek, Village of Chagrin Falls. “The new stop arm cameras are a valuable tool that will assist with the identification and potential prosecution of drivers who create unsafe conditions.

“The safety of our children is paramount,” said Police Chief Michael Rizzo, Village of South Russell. “With the increasing number of traffic crashes related to distracted driving, this technology will help law enforcement hold those distracted drivers accountable and may ultimately save a life.”

In both the Village of Chagrin Falls and South Russell, if a person is issued a citation for passing a stopped school bus with its red lights on, a mandatory court appearance is required, and they may be fined up to $500. The court also may impose a class seven suspension of the offender’s driver’s license.

The District hopes to continue to install these stop-arm cameras on the remainder of the school bus fleet.  The money to pay for these cameras came from the District’s permanent improvement fund, which is specifically used for vehicles and physical structures.

School bus safety information (including safety tips for motorists) can be found under TRANSPORTATION on the District website at https://www.chagrinschools.org/SchoolBusSafetyReminders.aspx.

“We value our students and we are implementing these strategies in an effort to bring awareness in our community to enhance general bus stop safety,” said Director of Operations and Strategic Initiatives Christopher Woofter, Chagrin Falls Schools.