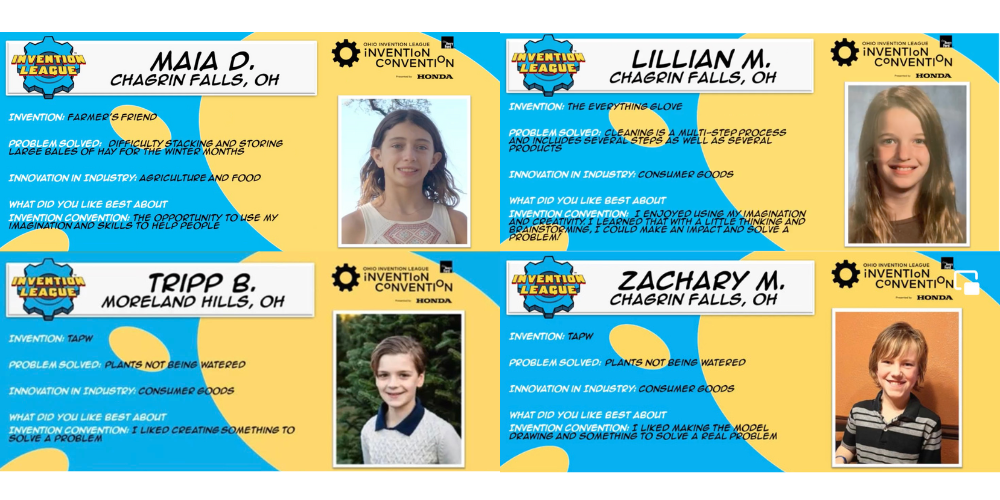 Through the Ohio Invention Convention, Chagrin Falls Schools introduces their students to a world in which they will solve their own problems and gain the confidence and 21st-century skills to invent their own future — through hands-on, real-world, project-based learning activities and exciting events at school, state and national levels.   The District has had many students participate in this program for many years.

There were four students from Chagrin Falls Intermediate School who were 2022 Ohio Invention Convention Honda State Final Award winners.  They are:

De La Cruz received a $250 CollegeAdvantage 529 savings award provided by Ohio Tuition Trust Authority and has the chance to move on to the annual Invention Convention U.S. Nationals.

De La Cruz’s invention was called “Farmer’s Friend” and solved the problem of difficulty stacking and storing large bales of hay for the winter months.  De La Cruz said, “What I liked best about the Invention Convention was the opportunity to use my imagination and skills to help people.”

Bellamy and Martin’s invention was called “TAPW” and solved the problem of plants not being watered.  When asked what they liked best about the Invention Convention, Martin said, “I liked making the model drawing and the ability to solve a real problem.”

Maschke’s invention was called “The Everything Glove'' and solved the problem that cleaning is a multi-step process and includes several steps as well as several products.  She said, “I enjoyed using my imagination and creativity.  I learned that with a little thinking and brainstorming, I could make an impact and solve a problem.”

At the heart of the Invention Convention is STEMIE education, which recognizes the foundational skills that Science, Technology, Engineering and Math create in combination with Invention and Entrepreneurship learning. STEMIE education prepares students for the needs of the 21st-century economy, creating critical thinkers and problem solvers and empowering a new generation of innovators.

Students started working on the problem-solving part of the inventing process in January. The preliminary CFIS Convention was held in March where students presented their tri fold projects to staff and families at a school-wide event.

These four students, along with Jack Hanley (Grade 5), had the opportunity to display their critical-thinking and entrepreneurial skills by presenting their prototype while sharing their invention process to judges via video submissions in the state competition. The students were celebrated in an inventor showcase live event, where awards were presented.

Alexandra Klusmann serves as the teacher advisor, and looks forward to another successful year. “I am so proud of their hard work and am grateful for the opportunity to be part of the detailed process that their inspiration and creativity leads them on,” said Klusmann.

“These types of awards never surprise me,” said Principal Curtis Howell, Chagrin Falls Intermediate School. “Ms. Klusmann is an amazing educator who not only challenges students but also has great relationships as well.  Couple that with the amazing families we have in our District, and this is the result you get! I consider myself lucky to get to experience this magic happen daily at CFIS.”