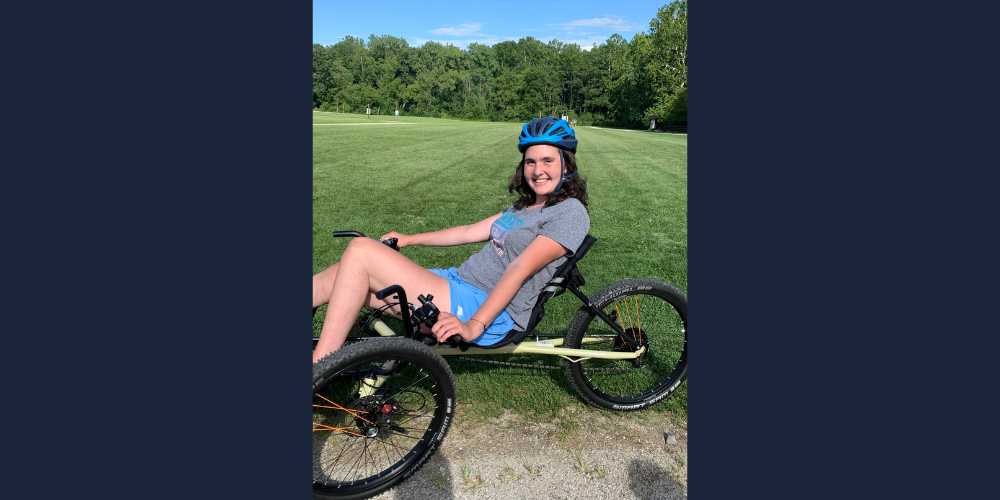 This is Chagrin…A Reflection on One Student’s Story

Chagrin Falls High School had an all-school student assembly on September 8 that centered around the District’s school-year theme “This is Chagrin…Write the Story.”

In the first part of the assembly, Principal Mike Janatovich talked about leadership and the growth that comes from focusing on one’s actions and writing a story by doing positive things day in and day out.

The purpose of the assembly was to share how everyone is in charge of writing their own story.  Sometimes that story may change along the way, and it is how a person responds to that change that makes their story even more impactful. Chagrin’s newest student, Margaret Malarney, exemplified this idea through a video message presented at the assembly.

In April 2020, Margaret was suddenly diagnosed with lymphoma. A biopsy of a swollen lymph node confirmed T-cell lymphoblastic lymphoma. She experienced very serious complications from her first month of chemotherapy, which ultimately caused her to suffer an anoxic brain injury. Margaret slipped into a minimally conscious state, and remained in the hospital through both her 14 and 15th birthdays. She spent weeks in the PICU, on the oncology floor, at hospice house, and at inpatient rehab before coming home in June 2021. When she was diagnosed, she was an active eighth-grade student-athlete at St. Joan of Arc in Chagrin Falls. She joined the students at Chagrin Falls High School as a sophomore in August.

Her family and District speech language pathologist, Cheri Salvati, decided to create a video message that introduced Margaret to all the students at the high school. With the help of Media Specialist Angie Jameson, Margaret was not only able to introduce herself to fellow classmates, but express the journey she has been on and her wish to make friends and have everyone treat her no differently than anyone else.

“The reaction from students and staff was astounding,” said Salvati. “Throughout the day, everyone was saying hello to her and greeting her with positive words. We heard  ‘Hi Margaret’, ‘good job,’ ‘liked your story,’ ‘great video,’ ‘have a great day,’ and ‘keep on writing the story.’” The warm responses did not stop all afternoon and Margaret’s concerns about feeling weird changed immediately and by 10 fold after she felt that students liked the video.

This summer, Margaret was able to return to one of her previous loves, cross country. She rides an all-terrain, three-wheeled recumbent bicycle on streets and trails with the Chagrin Falls High School team. At cross country practice the afternoon following the assembly, two junior students offered to run with Margaret along a path she could safely navigate.

The three of them chatted while running for four miles and because they were traveling at a safe pace, Margaret’s aide and mother were able to back off and allow her to simply spend time with her peers. Margaret was even invited to a party at one of the girl’s houses that weekend.

“It was life-giving on so many levels … just to see people starting to accept Margaret a little,” said Salvati. “The video has made it not so scary to approach her, and for those who felt compassionate, gave them the courage to step up.I could not have hoped for such a remarkable response. It fills my heart to watch.”

Prior to the video, Margaret was included in a National Geographic article on “The Power of Touch” which mentioned that Margaret’s therapy includes abundant touch. Her mother, Kate, was quoted as saying, “It gives us an entry to her.”

Kate has posted about Margaret’s journey on CaringBridge, a caring social network to help people stay connected with family and friends during a health event. In her most recent post, she wrote about Margaret beginning at Chagrin Falls Schools: “The school is working so hard to make things accessible – physically, academically, socially. We are so grateful for the commitment and care. And by what often seem like divinely inspired ideas!”

Some of these ideas were Margaret biking with the cross country team, aides riding their own bikes alongside her at practice, and teachers giving her a camera to take photos of her teammates running at cross country meets.

“John [Margaret’s father] and I agree that Margaret’s journey isn’t just about her; there’s a bigger picture, and she knows it too,” said Kate.

“Anytime you bring students together, it is an opportunity to build community within your school,” said Janatovich. “Today, we made this opportunity authentic to our students. Their response has brought our high school community closer. As a building principal, this makes me proud, inspired, and excited to see students have the courage to share and listen to other students' stories.”